Entrants are invited to create a brilliant video capturing a fantastic rally, a coaching explanation or an outstanding new drill. Teuton shoes will be awarded to makers of the top three videos.

To celebrate ‘World Squash Day’ the WSF (Squash57 WSF YouTube channel) has partnered with Teuton, UK-Racketball and SquashMad to challenge you to come up with your own Squash 57 video which will entertain and/or inform viewers about Squash57, ‘A Lifetime Sport’.

Videos: Length – no more than 5 minutes in length; Format – MP4; Video Usage – Entrants must allow the WSF to use their video submission(s), in part or entirety, on their YouTube Channel ‘Squash57 WSF’ and/or within future Squash57 coaching material.

Entry Process: Video – upload videos online, e.g. to YouTube, for public (i.e. the judges) viewing; Submission – Entrants email wsf.squash57@gmail.com their video entry/entries, attaching to that email a copy (pdf or photo) of the below entry form that has been both completed and signed

Judging process: All entries submitted by the deadline of 31st October 2020 will be judged by the WSF Squash57 Commission. The winning three entries will be announced in November (judging decisions are final), contacted at the email address provided in their entry submission and be eligible to receive a pair of Teuton Squash shoes, the WSF official shoe. 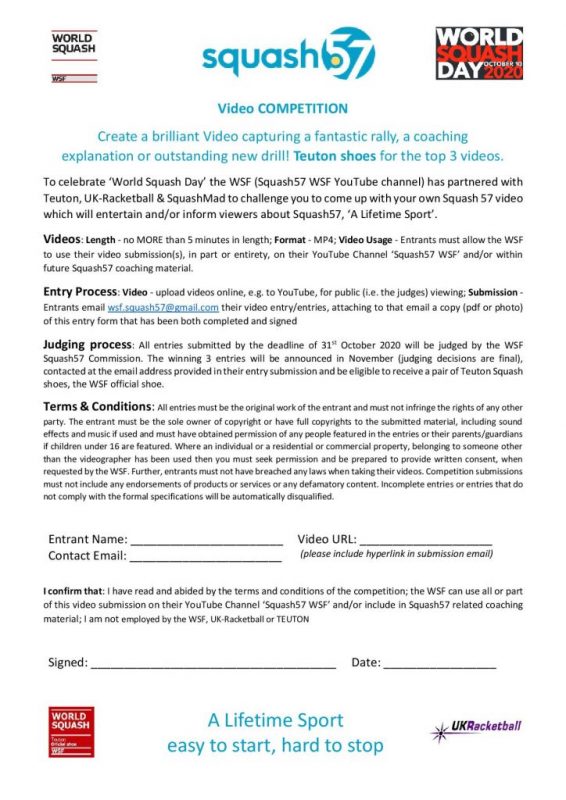 Makin On the Rise in PSA Men’s World Rankings