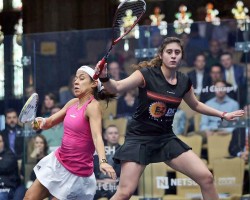 Former World No.1 Nicol David crashed out of the 2016 Windy City Open presented by Guggenheim Partners and Equitrust Life Insurance Company, PSA World Series tournament, at the quarter-final stage after falling to a straight-games defeat at the hands of Egyptian Nour El Sherbini – the 20-year-old who ended David’s J.P. Morgan Tournament of Champions’s campaign by the same scoreline in January.

El Sherbini, who went on to win the Tournament of Champions in what was her maiden PSA World Series triumph, played with pinpoint aggression and confidence from the very first serve to nullify 32-year-old David’s strengths across the court and set up a mouthwatering semi-final encounter with World No.1 Laura Massaro, who sent out a signal of intent with her ruthless demolition of World No.6 Omneya Abdel Kawy of Egypt in just 29-minutes. 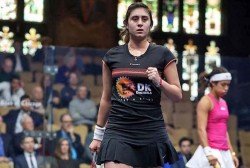 “But today I wasn’t overthinking things on court – I was just going for my shots. Once I had an opportunity to attack I just went for it but all three games could have gone either way – thankfully in the end they all went for me.”

England’s Massaro has been the player to beat on tour so far this season but after a poor showing at the Tournament of Champions in January, when she lost out in the last eight, she looked to be back to the form that took her to glory at the U.S. Open and Qatar Classic as she dominated against Kawy to underline her credentials as the tournament favourite and top seed. 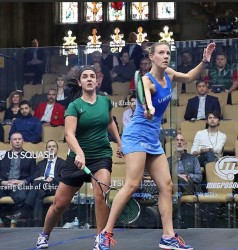 “You can never let your guard down at all in any match and I think in that third game I maybe switched off and was already warming down,” said Massaro.

“As a result she got back into and it was edgy. I’m angry at myself for that. I did the same thing in the last round so I’m really happy to get off 3-0 against a very dangerous opponent and I’m really excited to be in the semi-finals.”

On the other side of the draw defending champion Raneem El Welily came through against World Junior Champion Nouran Gohar while all hopes of home success were dashed as American World No.7 Amanda Sobhy lost out to France’s Camille Serme in a thrilling five game encounter that the World No.5 took 11-9 in the fifth.

In the men’s draw defending champion Nick Matthew and 2015 runner-up Mohamed Elshorbagy, the World No.1, took a step towards a championship re-match with victories over Tarek Momen and Simon Rösner, respectively. 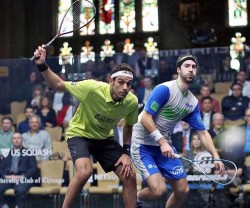 A regular face in the last eight of major tournaments throughout the past 18-months Rösner has looked increasingly likely to secure a breakthrough victory against the top players, with narrow defeats to Gregory Gaultier in particular underlining his continued improvement, but Elshorbagy dealt with the challenge in typically aggressive fashion, impressing as he came through in 53 minutes.

“Simon and I always have very high quality battles – we have similar type of play which is why our matches are always good and we enjoy playing each other,” said Elshorbagy.

“He’s tough to play so I’m happy to get off the court with the win. The longer the match went on the better he was playing.

“I’m feeling good physically right now. I was ill her last year and really it was a miracle for me to get to the final – this year I’m fresh and happy to be playing well and hopefully I can carry on the good form into the semi-finals.” 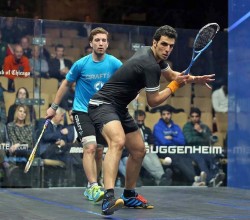 Elshorbagy will play Colombia’s Miguel Angel Rodriguez in the last four after the ‘Cannonball’ eliminated Elshorbagy’s younger brother Marwan 3-0 while Matthew will line up against World Championship runner-up Omar Mosaad.

The powerful Egyptian ended the run of viral-sensation Mathieu Castagnet after a bruising 84 minute battle that was played at a relentless pace from start to finish and had both men on the brink of exhaustion towards the close.

You have to give 100 per cent in every match and I really had to push hard today,” said Mosaad.

“He’s such a good player and pushes a lot when he’s tired. I think we both played well and I’m happy to win an get through to the semi-finals which I’m looking forward to.

“It’s going to be hard against Nick but I will give it my all – now it’s time to recover and be ready for it.”