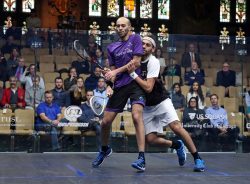 On seven previous attempts 23-year-old Marwan had failed to take more than a solitary game from 26-year-old Mohamed but, under the chandeliers of the University Club of Chicago, he fought through the mental barrier to come through a compelling five-game battle 1-11, 11-8, 13-11, 5-11, 11-8.

It was Mohamed who started stronger, taking the first game 11-1 as he set a blistering pace. But Marwan responded, mixing up the pace and using deception in the front court to level before going on to seal the match, ushering an outpouring of emotion from both.

“It’s tough – we both new it was going to happen at some point,” said Marwan.

“Every time we play it’s a battle on court – but we are best friends off court. I’m grateful for the sport – it has allowed me to have my brother as my best friend. We share the same life, have the same dreams and we support each other.

“We’re there for each other. It’s a tough day today for us. But I have a big match tomorrow to look forward to and a chance to reach a first World Series Final.” 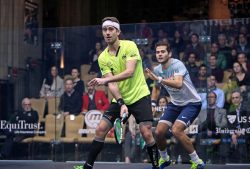 Mohamed ElShorbagy’s main contender for the number one spot in the World Rankings, Gawad, came into Chicago bidding to win a third straight PSA World Series title but found himself up against an inspired Golan – who will compete in a major semi-final for the first time since the 2014 Hong Kong Open after winning 8-11, 11-4, 11-9, 11-9.

Prior to the tournament the Spanish former World No.5, and current World No.21, hadn’t won a match for six months following a back injury but produced a tactically superb display to take Gawad out of his comfort zone and seal the match after 73 minutes.

“I had a back injury and a few months ago I didn’t know if I’d be able to play again – I was 34 and my back wasn’t responding well,” said Golan.

“I kept doing the work and I was so happy to get back on court last year. But I hadn’t won a match until this week and I think that match winning confidence is so important to help you increase your level.

“And today I had nothing to lose. I knew I’d have to be at my best and I took the opportunities. I defended well and tried to be very aggressive as well and change the pace, and it worked.

“Tomorrow is another match. I want to enjoy this one – eat well and sleep well and then I’ll worry about the next one. There’s no point playing if you can’t take some time to enjoy the win.”

In the Women’s draw an Egyptian finalist is guaranteed after the trio of Nour El Sherbini, Raneem El Welily and Nouran Gohar came through to join the in-form Frenchwoman Camille Serme in the last four. 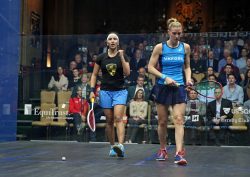 After stuttering early in the tournament Gohar secured an eye-catching 3-0 win over former World No.1 Laura Massaro courtesy of a dominant performance that saw her control proceedings from the start and leave Massaro powerless to halt the charge.

“In the first round I didn’t think my shots were going well and I didn’t feel like I was moving very well,” said 19-year-old Gohar. “But I’ve stuck to the plan and been improving with each match.

“I tried to make sure I stayed positive. My mum was with me reminding me that I’ve trained very hard in the past few weeks.

“But even at 2-0 today I knew I had to stay fully focused because she can come back. She’s so strong mentally, so I’m very happy to have come through.” 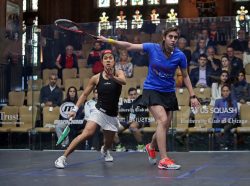 “I’ve watched Nicol since I was six years old and I’ve learnt a lot from her,” said El Sherbini.

“She’s always difficult to play against – she fights for everything and never gives up. It is always very tough and she brings the best out of me but I am happy that I am through.”