Egypt’s Marwan ElShorbagy will compete in a PSA World Series tournament final for the first time ever when he will look to put his name alongside that of elder brother Mohamed ElShorbagy on the winners board at the Windy City Open presented by Guggenheim Partners and EquiTrust Life Insurance Company.

After defeating his elder brother, the World No.1 and 2016 tournament winner, in an emotional quarter-final, ElShorbagy regrouped and came through a last four encounter with Ali Farag 11-8, 11-9, 8-11, 11-9.

He will now take on Frenchman Gregory Gaultier, the World No.3 whom he beat in the final of the 2016 Grasshopper Cup, with the aim of keeping the silverware in the family. 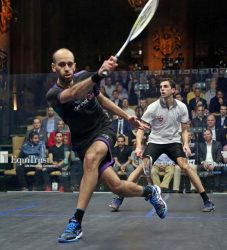 “It was very hard to back up what happened yesterday – emotionally, mentally and physically,” said ElShorbagy.

“I didn’t sleep very well last night and I tried to stay away from my phone – there was a lot of messages on social media.

“But my brother called me before the match today and helped me prepared me for it – he gave me the game plan and told me that these opportunities, once you get them you have to take them. I felt ready for it because of him.

“I’ve had some good wins so far to reach the final but I want to keep it going. I really want that title and I’ll give it everything that I have tomorrow.”

Gaultier, 2014 tournament champion, secured his place in the final by defeating unseeded Spaniard Borja Golan in a highly charged 3-0 victory that belied the intensity and competitiveness of the encounter. 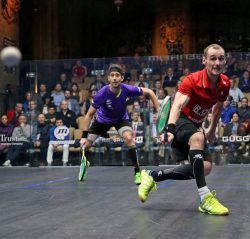 Golan began where he left off in yesterday’s hugely impressive victory over World Champion Karim Abdel Gawad, played high level, patent squash to frustrate Gaultier and embroil the Frenchman in a battle of attrition which left Gaultier cutting an increasingly frustrated figure.

But the former World No.1 found a way to answer every question Golan put to him, saving four game balls in a mammoth 28 minute second game to set up the platform for victory.

“It was a really intense match – we were both playing well,” said Gaultier.

“It’s great to see Borja back in good shape after his injuries and the second game was unbelievable. It could have gone either way but I took the momentum with me into the third.

“I’m feeling like I’m in great shape and I’m looking forward to tomorrow. I’ve been playing well all week and haven’t played many long games so there’s still a lot left in the tank.”

2015 and 2016 Women’s champion Raneem El Welily kept alive her hopes of completing a Chicago-three-peat by winning a mammoth battle with 19-year-old World No.4 Nouran Gohar. 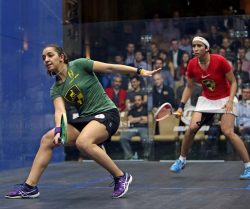 Former World No.1 El Welily can often be guilty of losing her concentration and focus during key stages but showed improved composure and mental strength, twice coming from behind to take the match and keep her winning streak going in the Windy City.

“Today at the end, there was so much relief – it was so intense,” said El Welily.

“She played fantastic. I’m just very happy to be through. It’s a very important win for me mentally.

“I love it here in Chicago. It’s amazing to be in the final for a fourth time – there’s no pressure tomorrow but it would be fantastic to win here for the third time.” 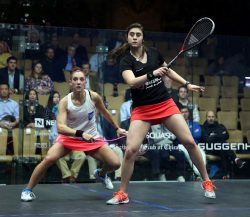 El Welily will face World No.1 Nour El Sherbini in the title decider – a repeat of the 2016 final – after the 21-year-old signalled a return to her top form with an impressive 3-1 win over Camille Serme, ending the Frenchwoman’s 12 match winning streak in the process.

El Sherbini looked out of sorts during January’s Tournament of Champions but cut an entirely different figures on court in a superb 8-11, 11-3, 11-6, 11-4 come from behind victory.

“It feels like things are coming together this week – I regrouped after ToC and trained very hard the past few weeks,” said El Sherbini.

“There are no expectations for me tomorrow – I’ll do my best to win. I’m happy to be back in the final, I love playing here and I’m really happy that it’s going to be an all-Egyptian final.”