Squash will feature at the World Masters Games next year, with the event set to take place in Asia for the first time between Friday May 14 – Sunday May 30, 2021.

The World Masters Games (WMG) is an international, multi-sport competition for athletes aged 30 and up. The Games are held every four years, and are sponsored and organised by the International Masters Games Association (IMGA).

In 2021, the games will be held in Japan’s Kansai region, which encompasses both Osaka and nearby Kyoto. Organisers are thrilled for Japan to be the first country in Asia to host the WMG and plan to welcome 50,000 participants, including 30,000 Japanese competitors and 20,000 international, to the 10th edition of the Games.

Squash will feature alongside 35 other official World Masters Games sports as well as almost 40 showcase sports.

Hosts New Zealand claimed the lion’s share of the squash titles in the 2017 World Masters Games. Over 600 competitors took part in 18 squash events, from Over-35 to Over-80 championships, at North Shore Squash Club. Former World No.36 Kashif Shuja led the haul of Kiwi titles, with the 36-year-old from Palmerston North winning the Over-35 gold medal after beating fellow countryman Sam Atkins in the final.

The first World Masters Games were held in 1985 in Toronto, Canada. 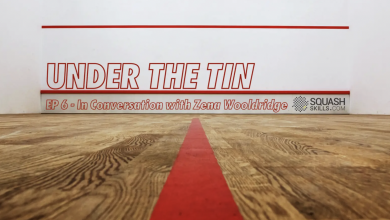 WSF President Zena Wooldridge Speaks to Under the Tin