Peruvian Elias Rises To No.15 In Men’s World Rankings 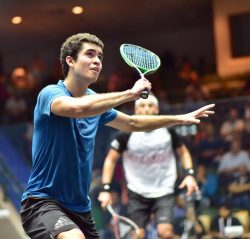 Elias, the former World Junior champion, powered his way past three-time World Champion Nick Matthew – who remains at World No.4 in the latest standings – to reach the last four before losing out to current World Champion Karim Abdel Gawad in a hard fought five-game battle in which the Peruvian took the first two games.

Outside the Top 10, former World No.1 Ramy Ashour – who turned 30 yesterday – has moved up three places to No.11 following his victory at the 2017 J.P. Morgan China Open in early September, moving ahead of Germany’s Simon Rösner, fellow Egyptian Mohamed Abouelghar and England’s Daryl Selby – who sits one place above Elias. 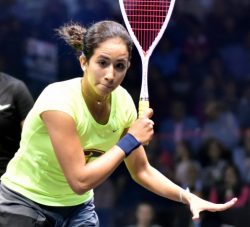 Egyptian Nouran Gohar, who yesterday celebrated her 20th birthday, has moved up two places in the latest PSA Women’s World Rankings to occupy the World No.5 spot.

The hard-hitting player from Cairo, who last month fell out of the top five for the first time in over a year, enjoyed a purple patch of form throughout September, reaching the final of the J.P. Morgan China Open – where she lost to compatriot Nour El Sherbini, who remains at World No.1 for an 18th consecutive month – before lifting her first title of the season at the Macau Open.

She is now within 200 points of England’s former World No.1 Laura Massaro, who occupies the World No.4 berth, while Frenchwoman Camille Serme has moved up one place to a career-high equalling World No.2 – overtaking Raneem El Welily who falls back to No.3, her lowest ranking in six months.

Serme, who was the only player to win two PSA World Series titles during the 2016/17 campaign, is now within 150 points of El Sherbini ahead of the first World Series title of the 2017/18 season – the U.S. Open – which gets underway next week.

Elsewhere inside the top ten England’s 27-year-old Sarah-Jane Perry has narrowed the gap on eight-time World Champion Nicol David to less that 20 points courtesy of her victory at the 2017 Oracle NetSuite Open, where she recovered from match ball down to defeat David in the final.

American Amanda Sobhy, the Harvard-graduate who has been out injured for over six months, falls out of the Top 10 for the first time two years to be replaced by New Zealand’s Joelle King, while her Team USA compatriot Olivia Blatchford moves up one position to No.16. 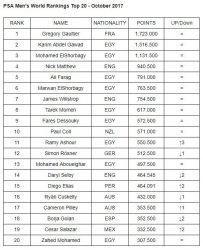 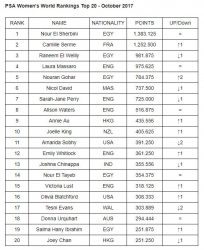