Legendary Englishman Nick Matthew made his last ever appearance at the AJ Bell PSA World Championships after the 37-year-old fell to World No.2 Mohamed ElShorbagy in the quarter-finals of the sport’s most prestigious tournament, which moved from Manchester’s National Squash Centre to the Manchester Central Convention Complex for the quarter-finals onward. 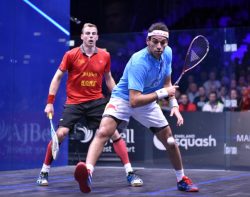 But he was up against a rampant ElShorbagy, with the Egyptian powerhouse dominating the first two games to go ahead. Matthew fought back to take the third – resulting in a huge cheer from the former World No.1’s home crowd – but he was powerless to stop the former 26-year-old from wrapping up an 11-7, 11-6, 5-11, 11-6 victory to end English participation at this year’s World Championships.

“I was playing against someone who is one of the greatest in the game,” said ElShorbagy, who has won 14 of his 23 matches with Matthew on the PSA World Tour. 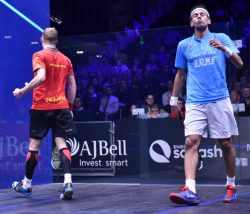 “Whatever day it is, you know he is going to step it up and I always step it up against him. He certainly gave a huge fight when he was 2-0 down and I certainly didn’t expect anything less from him.

“It was such a high-quality match as expected and it has always been a great rivalry between us and an interesting one as there is 11 years difference between me and him. To have a rivalry with him is something that I will remember for the rest of my career.”

Matthew said: “2013 is a special memory and everyone around me is so comfortable here and it was my minimum this week to get to this venue. This crowd is absolutely fantastic and I know they were willing me on.

“It’s disappointing to go out in the quarters but I’m proud of my performance and if I keep playing like that, then a Commonwealth Games title is a realistic target and I’ll end this tournament with good memories of how I fought back.” 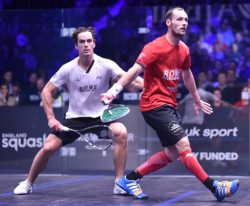 World No.1 Gregory Gaultier will stand between ElShorbagy and a place in a third World Championships final after the 34-year-old Frenchman defeated New Zealand’s World No.8 Paul Coll in straight games – just one day after wife Veronika gave birth to the couple’s second son, Liam.

“The doctor said we could do the birth earlier than the due date, which was December 20,” said 2015 World Champion Gaultier. “I was very close to flying home and coming back but I couldn’t get a direct flight. I slept for about three hours last night. I felt huge relief when the baby was born. I was energetic, but a little drained.

“Today I went on court and focused on the match and she was sending me pictures and I was happy and I play well when I’m happy. There’s no thinking when I’m happy, I just hit my targets. If I could win this week, having a new born child, it would be the best week of my life, the strawberry on top of the cake.” 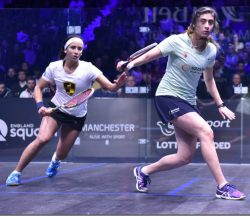 Defending champion Nour El Sherbini moved to within one win of a third successive Women’s World Championship final after the World No.1 dismantled compatriot and World No.5 Nouran Gohar.

El Sherbini, 22, sent Gohar out at the semi-final stage of the last two World Championships – which she then went on to win, becoming the first Egyptian female to lift the biggest prize on the women’s Tour in the 2016 edition – and she did it a round earlier this year by taking a 11-7, 11-3, 11-4 victory.

“I think it is very hard to play against someone that you are so used to playing against.” said El Sherbini, who has now beaten Gohar six times in a row, including at last month’s Hong Kong Open.

“You know she makes a plan based on the last match. It’s hard to play players so close together because it makes it hard to change game plans. I try to mix the pace with her a lot.

“There’s no pressure on me. I’m approaching it like a normal tournament, just like any others and enjoy my squash match by match. If I think about it then it becomes pressure, so I just try not to think about it.” 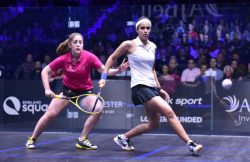 Egypt’s Nour El Tayeb was the other victor on the day, beating Welsh No.1 Tesni Evans –  who in the previous round beat former champion Laura Massaro, leaving hosts England without a women’s quarter-finalist for the first time in the event’s history – 11-9, 11-7, 11-9 to reach her first ever World Championships semi-final.

“I wasn’t as accurate or as aggressive as I hoped, but to get a 3-0 at the end of the day is a very good thing for me,” said El Tayeb.

“Recently, I’ve been trying to accept the nerves. You have to be nervous, if you weren’t, it’s not normal. I try to accept it and keep my mind on the squash.” 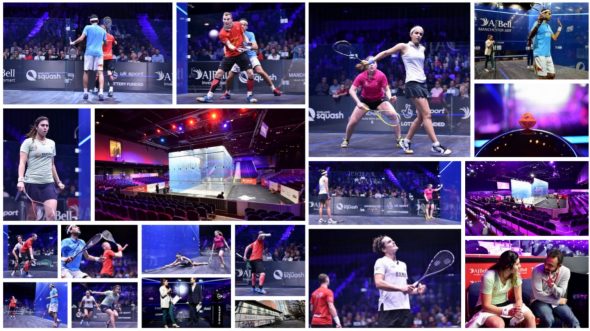