“We were delighted to have a further opportunity to show the exciting journey of change and innovation that squash has been on,” said Ramachandran. “Also to explain how we would be a low-cost addition with small athlete numbers.

“We have further scrutiny at a Q&A tomorrow, then can only hope we receive a nomination from the Tokyo Organizing Committee to the IOC. It will be a hard wait, but if Squash achieves the dream for our athletes it will be well worth it.” Satomi Watanabe and Ryunosuke Tsukue, two Japanese teenagers who have already had significant success on the international Squash stage, both spoke of their desire to compete in their home country and how a positive decision will be a great boost for the sport.

“This has been such a wonderful day,” said Watanabe, the US Junior Open Under 17 champion. “To have a chance to play at the Olympic Games in my own country makes me shake with excitement.”

Nicol David, the Malaysian world number one reinforced the message that competing in the Olympic Games would be the pinnacle of any player’s career – and repeated that she would give up all her eight World Squash titles for just one Olympic Gold.

David commented: “The road has been a long one but like all of my fellow players I am so pleased that Squash is in the fight now. We keep saying that Squash would bring something special and new to the Olympics.” 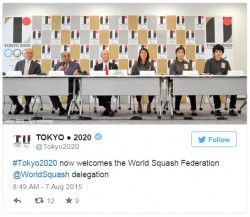 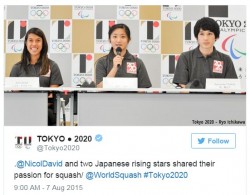 Record numbers exposed to Squash in 2015 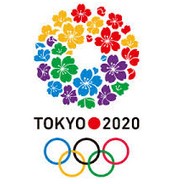