Ashour (pictured above) and Serme, both WSF Ambassador Programme debutants, will be joined Belgian national coach Ronny Vlassaks and international referee Marko Podgorsek, from Slovenia. The 2018 campaign will take place from 18-24 June.

“We are delighted that Ramy and Camille are able to take time out from their busy international schedules to join us in this vital annual promotional project for the first time,” said WSF CEO Andrew Shelley.

“We all look forward to meeting and interacting with the squash communities, sports authorities and media in Armenia and Ukraine. This opportunity to help younger Federations with their developmental and promotional work is one we relish.”

Ramy Ashour has become one of the sport’s biggest draws. Winner of 39 PSA World Tour titles, including the World Championship in 2008, 2012 and 2014, the 30-year-old from Cairo topped the world rankings for 21 months over a period in which he reached 12 successive Tour finals. France’s most successful female squash player of all-time and a record six-time European champion, Camille Serme (pictured above) achieved a career-high world No.2 ranking in February this year after winning the prestigious Tournament of Champions title in New York.

The WSF Ambassador Programme first visited the Baltic country of Latvia in 2011, followed by a trip to the African countries of Malawi and Namibia, then Panama and Venezuela in 2013, Papua New Guinea in 2014, before focussing on the Balkan region in 2015 with appearances in Serbia, Romania and Croatia. In 2016, the team visited Dalian and Macau in China. The 2017 edition was postponed until 2018. 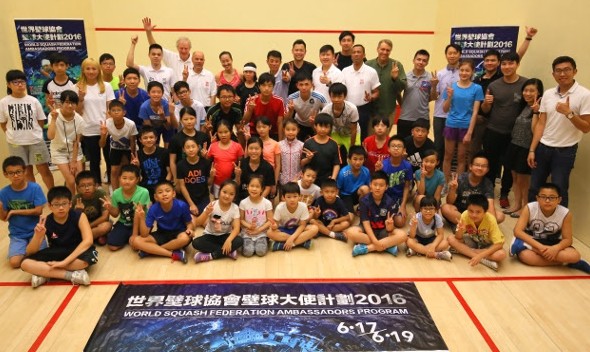