“This visit will help us achieve our goal – to see Panama represented for the first time at the next Men’s World Team Squash Championship,” said the country’s former national champion Pedro Altamiranda as the 2013 WSF Ambassador Programme visit to Panama reached its climax. 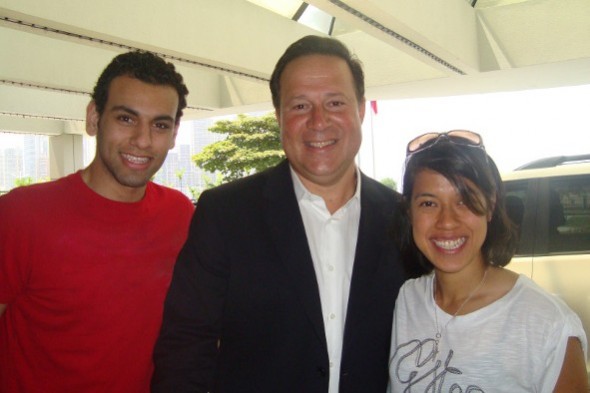 After meeting the country’s Vice President Juan Carlos Varela (pictured above), David and Elshorbagy headed to a press conference to welcome the World Squash Federation party. Altamiranda and reigning national champion Jorge Zachrisson described the unique boost to Squash in Panama that this visit would inspire, while fellow Panamanian host Dr Jorge Lasso de la Vega, who is Professor of Oncology & Gynaecology at the University of Panama, also highlighted the substantial health benefits the sport offers.

WSF CEO Andrew Shelley answered general questions including those on the sport’s bid to join the 2020 Olympic Games programme – and Camilo Amado, President of the Panama National Olympic Committee, described the process which will see squash, or one of its two fellow shortlist rivals, win the coveted place for a ‘new sport’ in the 2020 Games at the IOC session in Buenos Aires in September.

“I have seen the squash bid video and, of the three sports in contention, squash looks the most advanced,” declared Amado (pictured below). 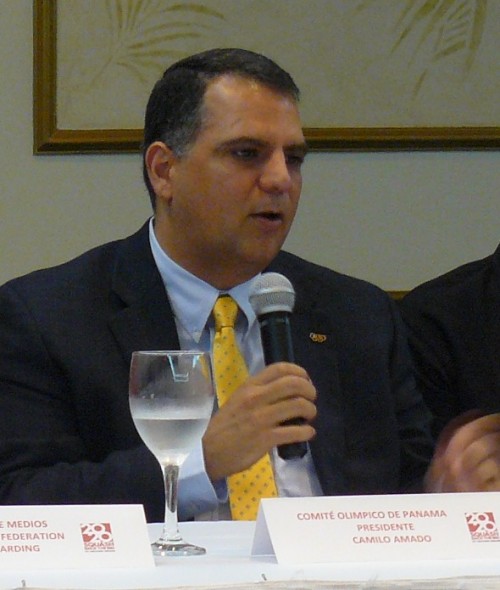 A session at the ‘Club Raqueta de Panama’, at which David and Elshorbagy ran a number of court sessions for all-comers, enthusiasts turned out in force – not just from Panama City but from all over the country as well some from neighbouring Central American nations.

“We were really surprised that we were able to play with Nicol, a world champion,” said Lara Vivone, an 11-year-old who joined in the fun with her eight-year-old sister Catalina and friend Maria Jose Buscaglia.

Nicol David, pictured below with some of the youngsters in her session, was thrilled with the response from the kids: “Some had clearly not played squash before, but had been interested in coming along after seeing posters promoting our visit – but they obviously loved it and wanted more. It was really rewarding.” 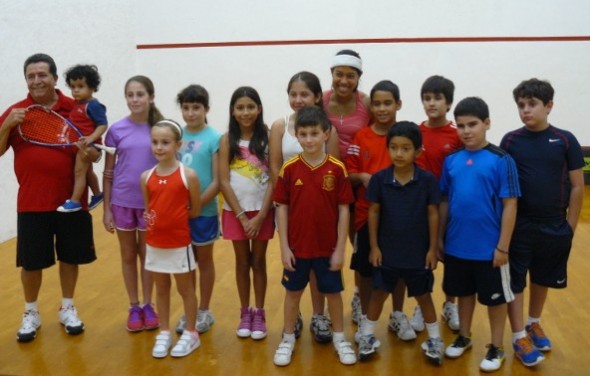 Zachrisson was overwhelmed with the response to the two world stars’ visit to his club: “I’ve seen so many people in the club ever – and we’ve certainly never seen so many kids in the club before.”

The session finished when Altamiranda took on David, and Zachrisson did battle with Elshorbagy.

“It was an honour to play her,” said Altamiranda after losing in straight games to the Malaysian superstar in an entertaining match which delighted the packed and partisan crowd. “I have been studying her videos on SquashTV for the past two months, trying to work out how I could beat her,” added the former five-time national champion.

“I tried to anticipate her shots, but she kept changing her game! It’s unbelievable that she has such great control of her racket. She anticipates like nobody I have ever seen.

“My goal was to get a game, so I’m disappointed I failed to do that.”

“It was his innovative shots that I couldn’t handle,” said reigning Panama champion Zachrisson. “It was a very fast pace – he just controlled the game.

“He’s the best player I’ve ever played – by far – and it was a great opportunity to be on court with him!”

David and Elshorbagy took time out to see the world-famous Panama Canal – and are pictured with Altamiranda (right) and Zachrisson (second left) as a massive Supertanker negotiated the final lock before heading into the Atlantic. 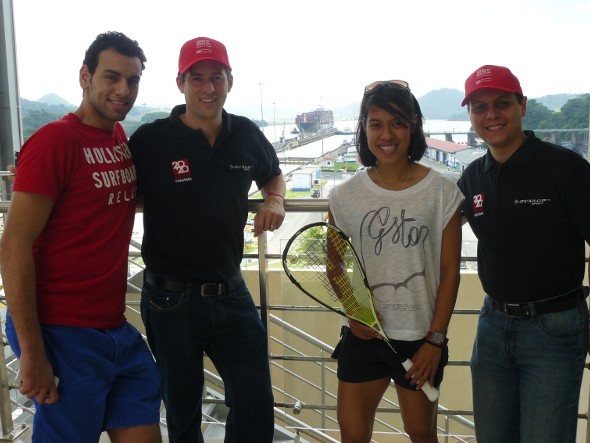 “We are delighted with the outcome of your visit,” Zachrisson told David and Elshorbagy (pictured, below, outside the club). “We did our best to promote the visit by advertising on TV and in the press, via social media and with posters – and the results we achieved were beyond our expectations. 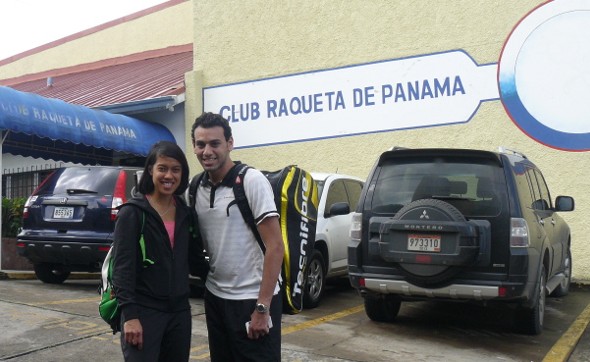 “Pedro has been the driving force behind our effort and Dr Jorge, who is passionate about the sport, has inspired his students to play by promoting the sport’s health qualities.

“Something like this only happens once – so I hope we are able to capitalise upon it fully.

“You have definitely opened doors for us at all different levels – even at the Olympic level.

“With the new four-court facility opening soon at the Union Club – a very popular social club which has around 3,000 members – we hope this will attract more new people into the game.

“And of course we must attract more juniors, and establish stronger links with the 30 or so apartment blocks in the city which have squash courts, and where families hitherto play without any formal link to a national system.

“We must make more of a focus to participate in future Central American Championship with our juniors,” said Zachrisson.

“But the biggest goal – and one which we are now much nearer to realising thanks to your visit – is to have a team in the 2015 Men’s World Team Championship,” concluded Altamiranda.

This is the third year of the WSF Ambassador Programme, the World Squash Federation initiative designed to highlight the appeal of squash in countries where the sport is in its infancy. After the first sortie to Latvia in 2011, the WSF Ambassadors visited Malawi and Namibia last year.

David and Elshorbagy now move on to Venezuela for the second leg of the 2013 programme.