As the 2013 WSF Ambassador Programme visit to Venezuela neared its conclusion, Francisco Paradisi had no doubts about its impact: “Our people will never forget it,” said the President of Federacion Venezolana de Squash. “It was definitely an inspiring visit which people will be talking about for a long time.”

On arrival, the group visited the headquarters of the Comité Olímpico Venezolano for a Press Conference hosted by theVenezuelan National Olympic Committee. NOC Treasurer and former Vice President Dr Elida Parraga de Alvarezescorted David and Elshorbagy around the Museum before meeting the national media. (Pictured below outside the NOC building are (L to R) Elshorbagy, Paradisi, Dr Parraga de Alvarez, David & Shelley) 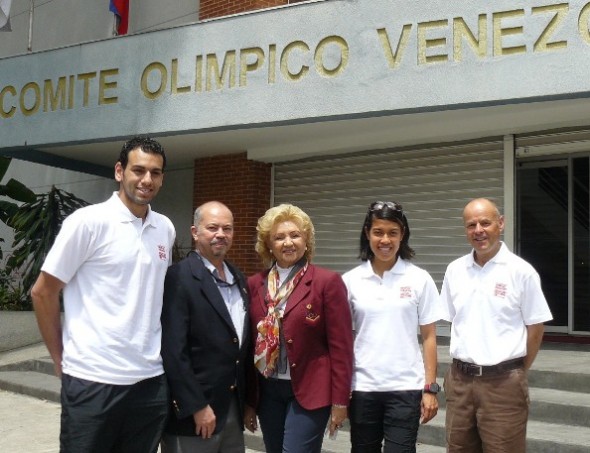 “Dr Elida thanked us for this great event in Caracas and for visiting the Venezuelan Olympic Building and its museum,” said Paradisi. “She praised our work in our bid for the 2020 Olympic Games and wished all the luck for squash at the next IOC meeting in Buenos Aires.”

Over the next two days, the team visited the 357 Spa Club y Club Santa Paula for a series of exhibition matches and clinics with a variety of players, including those from national men’s and women’s squads – plus Coaching and Refereeing workshops directed by Vlassaks and Allanach.

In one of the most eagerly-awaited matches, Elshorbagy took on Gabriel Teran, the Venezuelan number one who led his national team in last month’s Men’s World Team Championship in France.

“The big difference between Mohamed and the players I usually play is his deception – he always plays the ball really late so you never know where it is going,” said Teran after his introduction to world class squash. “He’s at a different level to anyone I have ever played before!”

Top junior Santiago Ramos also enjoyed a session with the top-ranked Egyptian. “Playing with Mohamed is something I will never forget,” said the 16-year-old. “It’s made me realise that if I want to get to a high level, I will have to practise a lot! It makes me want to play more and more.”

Gabriela Cioce, the country’s top-ranked woman, had the chance to play David: “Nicol is such an amazing ambassador for our sport – everyone has fallen in love with her and the team. You can be sure that, from now on, everyone here will be playing with new motivation.

“This has been a wonderful opportunity for people in Venezuela to get to know more about squash – we’ve never had media interest like this before. It’s been great for players – especially the girls – we are really motivated. It will help us realise our dream to develop our passion.”

After an enthusiastically-attended refereeing workshop, Allanach commented: “Those who attended the refereeing sessions generally had good knowledge of the rules, and could explain them.

“But with their Latin temperament, local players can get very passionate about their squash and this can sometimes lead to confrontation with referees.

“I felt that there were some participants who had the knowledge and skills to go further as referees – but the challenge for them is to get better matches to handle. There is no doubt that they have the potential.”

One who has already taken his refereeing enthusiasm and skills further afield is Venezuelan Daniel Greco, a South American regional referee: “It’s going to change the way players think about referees – they will have more respect for them.” 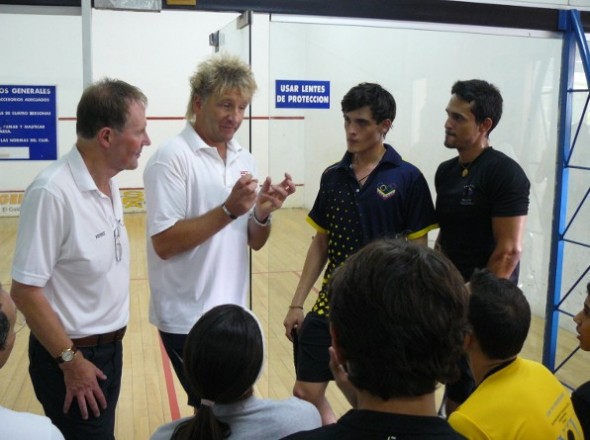 Vlassaks (pictured above, second left, with Venezuelan team players and Allanach, left) spotted notable talent amongst his coaching candidates: “There were a few players here who impressed me – ones who, if they were based say in Belgium or Holland, with a wider range of facilities available to them, would have the chance of success.

“It was clear that many of the players could see the value of coaching and being coached. The experience was obviously a real eye-opener to some of them, who didn’t realise what coaching could do to take them up to a higher level.

“A proper coaching programme here could produce real dividends. Imagine if they had access to such expertise: how fantastic they would be!”

Nicol David was thrilled with latest of her three successive WSF Ambassador Programme visits – which included a dinner hosted in her honour by the Malaysian Ambassador: “What impressed me is that the Venezuelans made the most of what was available – the refereeing and coaching workshops, the opportunity to be on court with me and Mohamed, and the exhibition matches. You can tell that there is strong interest – so now we hope they use this visit to move onto the next level.

“It’s so rewarding to do what we do – to see the enthusiasm we can create.

“We’re full-time squash players – but it’s good to have some fun as well, and spend some time with people who love the game like we do,” said the 29-year-old from Penang (pictured below with Elshorbagy and brothers Ramses, 9, and Diego, 5, proudly wearing caps they had produced to honour the two players). 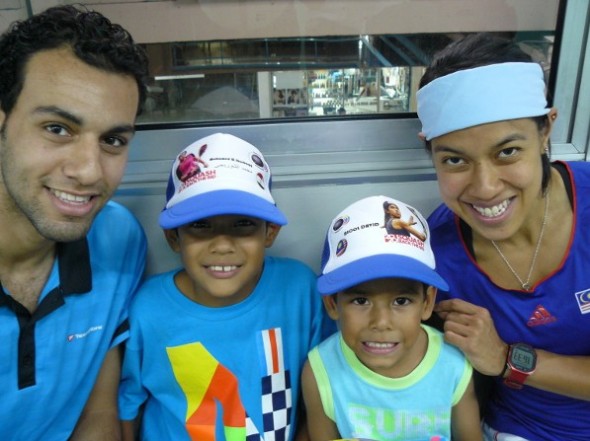 “From what I have seen, I am sure Venezuela can produce good players in the future.”

Elshorbagy, who made his Ambassador debut in 2012, added: “After my first experience as a WSF Ambassador last year in Africa, I felt more confident this year – and it has been great this time to meet different people, from different cultures. I was impressed by the enthusiasm for squash shown by all the people we met, all keen to take advantage of our visit. I really hope we see a champion from Panama and Venezuela one day soon.

“Again, it was such a pleasure to work alongside Nicol again – I learnt so much from her last year and this year I think we have worked really well together, as well as having a lot of fun.”

Francisco Paradisi (pictured below with the two WSF player ambassadors, overlooking Caracas) was overwhelmed with the visit’s success: “It has been an exciting experience for all of us. The comments I have had from people who attended the coaching and refereeing clinics have been unbelievable – they couldn’t believe how much they learnt. They were really happy. 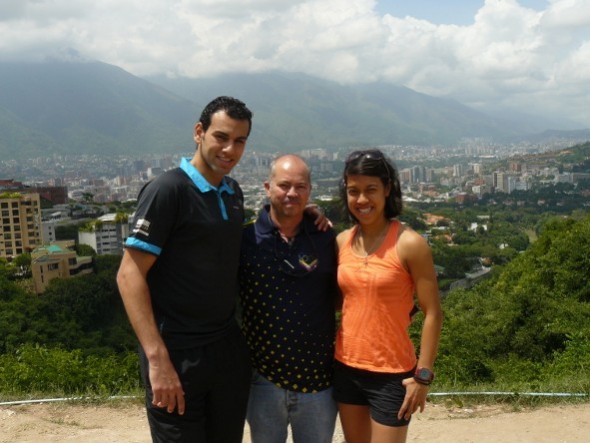 “It was such a great experience for our players to be on court with Nicol and Mohamed. The kids were so excited by it and your Ambassador players were so generous with them

“Our people will never forget it. It was definitely an inspiring visit which people will be talking about for a long time,” exclaimed the local federation president.

“It was a great experience for our national squad to be with Mohamed – not just on court, but being able to hang out with him too. And it was especially beneficial for Gabriela to play with Nicol – she never has the chance to play top players.

“The coverage we received on TV was really incredible. We’ve never had this kind of media exposure before – I have received loads of texts and phone calls from people who saw it. There is more coverage to come – but we must try and keep it going!

“The visit has also really raised our profile with the NOC – and, even though our national sport is baseball, they are impressed that the WSF chose to come to Venezuela.

“Our next major event is the Juegos Bolivarianos (the ‘Bolivarian Games’, the only multi-sport event in the world to be named after a person which is contested by Panama, Colombia, Ecuador, Peru, Bolivia and Venezuela, plus invited members El Salvador, Guatemala, Dominican Republic and Paraguay). This is our Pan American Games or Commonwealth Games – and squash has been included for many years.

“Our men will be competing in the Games, but we hope that this visit will open the door for our women’s team to take part too.”

Andrew Shelley summed up the success of the latest visit: “I call these our ‘E’ trips. They Encourage and Enliven the countries we visit, and Energise us too. Entertainment comes from seeing the players in their city, and Excitement taking part in the workshops. (Picture below shows David & Elshorbagy with a jubilant group of Venezuelan squash enthusiasts) 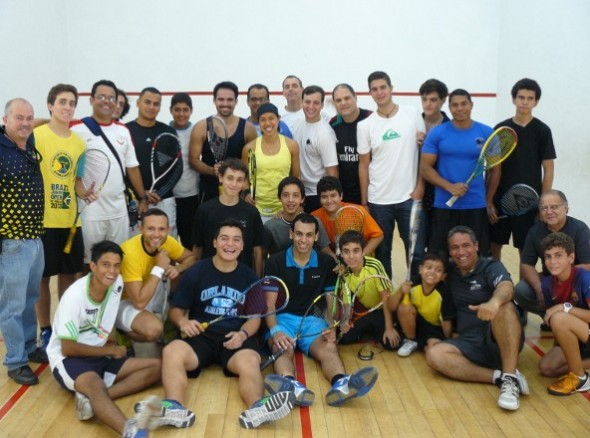 “They work on so many levels, and we wish we could do more, but for each one we are indebted to the sport’s top players who give their time without fee, similarly the refereeing an coaching gurus who spread their expertise – yes, another ‘E’ – and to the hosts who are so welcoming.

“Long-term relationships and stimuli come from each – and the great squash communities in Panama and Venezuela will add to the long list, I am certain. It was great for all of us to spend time with them.”

This is the third year of the WSF Ambassador Programme, the World Squash Federation initiative designed to highlight the appeal of squash in countries where the sport has taken root and can benefit. After the launch in Latvia in 2011, the WSF Ambassadors visited Malawi and Namibia last year, and began the 2013 programme in Panama.