The Ambassador Programme international promotional initiative was launched by the World Squash Federation two years ago. With two of the sport’s leading international players, plus an international coach and referee, the WSF Ambassadors first visited the Baltic country of Latvia – then last year, spearheaded by David and El Shorbagy, the team highlighted the appeal of Squash to the public and media in the African countries of Malawi and Namibia. 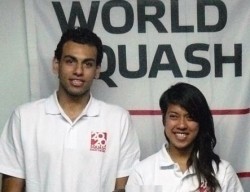 The players will integrate with the local squash communities in Panama City and the Venezuelan capital Caracas, providing clinics and exhibition matches. Meanwhile coaching and refereeing workshops will be hosted in Venezuela by Ronny Vlassaks, the highly-experienced European Squash Federation Tutor who is also the Head Coach of the Dutch and Belgian national squash teams; and Scotsman Ian Allanach, a former WSF top referee and now a worldwide refereeing assessor.

Panama City now boasts more than 50 courts since the launch of the Racquet Club of Panama – with three courts – in 1981. Despite not having a player in either the men’s or women’s world rankings yet, the country already participates in the Pan Am Squash Championships and stages four national championship tournaments every year.

“To have these squash superstars coming to Panama will not only bring media interest here, but give our squash community an exciting opportunity to interact with them, and help us bring new players into our wonderful sport,” said the excited two-time Panama national champion Pedro Altamiranda.

Meanwhile, Squash Venezuela President Francisco Paradisi was also enthused: “In Venezuela we have around 100 courts. We are very excited about the visit of the WSF Ambassadors group as this will bring us a unique opportunity to promote squash, especially among the girls. I am sure it will be a great experience for squash and non-squash players.”