The World Squash Federation (WSF) has appointed the Professional Squash Association (PSA) to oversee its communications efforts following a restructuring of the organisation’s PR, media and marketing activities which will come into effect from May 1.

Since signing a Memorandum of Understanding in 2017, the WSF and PSA have forged a strong working relationship which has resulted in the joint launch of the WSF & PSA Satellite Tour, while both the 2017 and 2019 WSF Men’s World Team Squash Championships and the 2018 WSF Women’s World Team Championship were broadcast through the PSA’s OTT platform, SQUASHTV.

The appointment of the PSA to oversee the WSF’s communications efforts will see the two organisations collaborate further to grow the profile of the sport and WSF’s digital channels, while the PSA will also assist in the promotion of major WSF tournaments across the globe.

Howard Harding, WSF World Media Director since 1996, will help with the transition until the end of June.

“I would like to thank Howard most sincerely for his unwavering commitment to the promotion of the World Squash Federation over the years. He has epitomised the communications of our sport, its players and different stakeholders with the sole purpose to enhance the sport he has cherished. I wish him all the best in his endeavour with www.squashinfo.com,” said WSF Chief Executive William Louis-Marie.

“Communications have become more and more critical for any international sporting organisation and I’m greatly delighted to join forces with PSA to benefit from their highly recognised expertise, enhance the communication and marketing of WSF activities and better promote the stories of our National Federation members.”

PSA Chief Executive Alex Gough said: “Following the signing of a Memorandum of Understanding with the WSF, we have enjoyed a closer working relationship with them than ever before, and we are looking forward to assisting the WSF with their communications efforts in the future.

“As the two global governing bodies in the sport, the PSA and WSF share a number of common goals and we are pleased to be playing an active role in increasing squash’s visibility and profile beyond the professional game.”

Harding said: “As a passionate lover of squash, the media role at the WSF was always a dream job and I am proud of the contribution I have made over the 23 plus years in trying to keep news of the sport in the forefront of the world’s media.

“But as I approach my 75th birthday, and with a new regime at the WSF, I feel it’s time to stand down from the role.

“I look forward to being able to devote my squash energies full-time into further developing my website www.squashinfo.com which contains comprehensive statistics relating to the sport’s events and players.”

#StaySafeWithSquash – No Court. No Problem EP.2 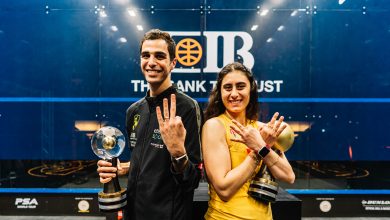