World Squash Federation President N Ramachandran has praised the Xodus 7 Continent Challenge as an initiative of ‘epic proportions’ and one which has given the sport’s Olympic bid a great boost.

Peter Nicol MBE and fellow former professional Tim Garner launched the Xodus 7 Continent Challenge in Port Stanley in the Falkland Islands on the edge of Antarctica just over a week ago – then traversed the globe via Santiago in Chile; Sydney in Australia; Kuala Lumpur in Malaysia; Cairo in Egypt; and London in England before reaching the climax of their bid to contest 7 Squash Matches in 7 Days on 7 Continents to raise the profile of Squash’s campaign to join the programme of the 2020 Olympic Games in Connecticut in the USA on Saturday.

“DONE!” tweeted Garner after the intrepid pair rounded off their mission at the new 12-court Chelsea Piers Club inStamford, where Nicol edged to a 4/3 series victory in the squash challenge – after seven matches, 32 games and more than six hours of playing time!

“70 hours on airplanes, 40,000 miles of travelling and seven matches completed. It’s been an incredible week!”

President Ramachandran is full of admiration of the pair’s efforts: “Both Peter and Tim have already made significant contributions to the sport – Peter as a former world champion and world number one and Tim as director of major events like the British Open, World Series Finals and Canary Wharf Classic.

“But this went beyond the call of duty – it was an extraordinary pioneering mission of epic proportions which has caught the imagination of sports enthusiasts the world over and has done much to boost our Olympic bid.”

Garner, a former world No26, later commented: “We set out on Xodus 7 Continent Challenge to help highlight the profile of the 2020 bid and raise some money for two worthy causes. I think it did just that – and more, as each and every venue had pushed the boat to make their event special and in doing so did much for squash in their community.

“It has been a tough challenge, but I am pleased that we both managed to come through it relatively unscathed, though it may take a few days to recover as the muscles and bones are feeling a little weary!

“It was great to spend a week with one of my best friends – who, fittingly, I met through squash – though it was annoying to lose to him in the decider!”

On the journey back to London, Nicol added: “As we set off on this incredible journey, I was apprehensive for several reasons but also hugely excited. From landing in the Falklands all the way through to Stamford, CT, we were wonderfully surprised with the reaction from local squash players, the media and, to be perfectly honest, by our bodies to playing. We both expected to find the squash the hardest aspect of the tour but were delighted to find out that we were still capable of playing to a decent standard over the course of seven days.

“Tim and I both feel squash deserves a chance to be in the Olympics and if our Challenge helps in any way, then it’s been very worthwhile. We are also proud to have raised significant funds for both our official charities and for each of the local venue charities as well.

“Personally I would like to thank Tim for conceptualising, planning and executing the Xodus 7 Continent Challenge. He has served squash tremendously well now for 20 years in all different capacities and deserves great credit for what he does for the sport, most of which goes unnoticed. I also really enjoyed spending time with one of my best friends on an unforgettable journey. To win the deciding match was rather pleasing as well!!”

As well as profiling the Olympic Bid, the Xodus 7 Continent Challenge has raised monies for two squash causes: The first theLV= SOS Kit Aid Scheme, and the second Natasha’s Steps, a trust set up help young squash player Natasha Drake who is recovering from an idiopathic bleed on her brain. 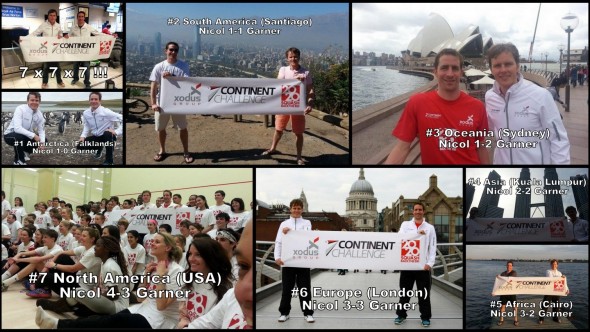