The WSF Ambassador Programme, a new international promotional initiative devised by the World Squash Federation, will be launched in Latvia later this year.

Riga will be the host city for the first WSF Ambassador Programme from 25–27 November, when the Latvian capital will welcome two leading international players, a coaching guru and a refereeing instructor to highlight the appeal of Squash.

While the players will integrate with the local squash community and media, referees and coaches from Latvia and local countries will be invited to attend workshops to help them spread ideas, information and good practice in the region.

The venue in Riga will be the Zelta Bowling and Squash Center, an imposing squash facility featuring eight courts and many other sporting and leisure options.

The coaching workshops will be undertaken by Ronny Vlasseks, a highly-experienced European Squash Federation Tutor who is also the Head Coach of the Dutch and Belgian national squash teams.  Meanwhile, looking after the refereeing side will be Scotsman Ian Allanach, a former WSF top referee and now a worldwide refereeing assessor.  The male and female player will be announced shortly.

Heralding the new initiative, WSF Chief Executive Andrew Shelley commented:  “There are squash courts in around 175 countries, and while we can only do so much each year to reach selected clusters of them, we will never run out of options!

“The scheme will continue with two further visits in 2012 where, like Latvia, we intend to support local efforts to promote squash by bringing in such a group of players, coaches and referees.  It is a package that works on many levels and we are excited about getting underway first in Latvia.”

Alex Pavulans, board member of the Latvian Squash Federation, was equally upbeat:  “Being picked as the first stop for the WSF Ambassador Programme is a fantastic opportunity to showcase our great game to a wider public.

“By launching the Ambassador Programme, the World Squash Federation is putting action behind the words by reaching out to all the corners of the world.  The Latvian Squash Federation is extremely excited for this chance to rally our troops, and I believe the entire enthusiastic Latvian squash community will warmly welcome the WSF delegates and top world players to our beautiful capital and to Zelta Bowling and Squash Center.”

Egyptians Forge Ahead In Herentals 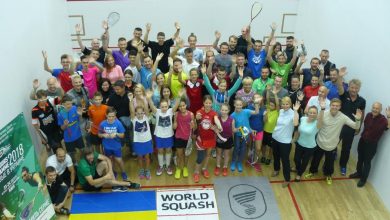