The WSF Coach Education Programme, the new World Squash Federation initiative which heralds the start of a worldwide unified and standardised coaching structure for Squash, will be launched on 2nd March with the opening of WSF Level 1 coach candidate registration.

Tutor training across the continents began earlier this year, leading to a number of coaches becoming certified to deliver WSF courses. Meanwhile registration for candidate WSF Level 2 and 3 comes on stream later.

The courses will include agreed core-content and delivery methods to ensure that standards are uniform and qualifications achieved are recognised not only in the coach’s own nation but worldwide too. Course registration will begin on 1st April.

“An expansion of the number of coaches who can help development of the sport generally and support elite encouragement is invaluable,” said WSF President N Ramachandran. “We are achieving this via a robust, modern, uniform and transportable worldwide coaching system.”

Charged with coordinating the Programme on behalf of the WSF Development and Coaching Committee, Michael Khan explained: “Through the Member Federations linked to the WSF Regional Course Managers, we look forward not only to providing a high standard unified structure that benefits well-established nations who already administer excellent courses, but also support for those nations which are thirsting for help too.” 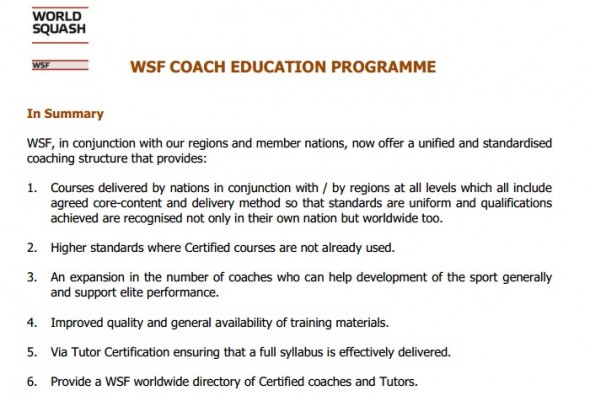