The World Squash Federation (WSF) has welcomed the news that ‘A Bronx Tale’ – a documentary directed by SquashSkills – has been nominated for the prestigious Peace and Sport Documentary Prize.

‘A Bronx Tale’ is a heartwarming story which explores the efforts of CitySquash – a founding member of the Squash and Education Alliance (SEA) – to use the power of sport to enrich the lives of children in one of New York City’s poorest boroughs, the Bronx.

Featuring insight from pioneering coach Bryan Patterson – who has committed his life to helping these children – and SEA Executive Director Tim Wyant as well as first-hand accounts from children participating in the programme, ‘A Bronx Tale’ highlights how CitySquash is helping children to reach not only their athletic potential, but their academic potential as well.

‘A Bronx Tale’ has been nominated alongside two other documentaries. The winner will be chosen by a panel of Peace and Sport ambassadors and will be announced at the Sportel Awards Ceremony which will take place in Monaco on Tuesday October 27.

This is the second time in four years that a squash documentary has been recognised by Peace and Sport after ‘The Girl Unbound: The War to be Her’ featuring Pakistani squash player Maria Toorpakai won the award in 2017.

“This is fantastic news and on behalf of the World Squash Federation, I would like to thank SquashSkills for their hard work in bringing this incredible story to life as well as CitySquash and the Squash and Education Alliance for the amazing work they do,” said WSF Chief Executive William Louis-Marie.

“This nomination not only demonstrates the value of our sport which is already recognised as one of the most entertaining racquet sports in the world but also the way it positively influences the lives of thousands of kids in many countries all over the world.”

SquashSkills Founder and CEO Jethro Binns said: “We’re delighted that ‘A Bronx Tale’ has been nominated for this award. It’s a great opportunity to showcase the positive effect that squash can have on the lives of young people from disadvantaged backgrounds.

“When we first met Bryan and Tim, we hadn’t intended to make a film, but having seen the difference that squash was making in the lives of these children, we couldn’t leave tale untold. The dedication of Bryan and Tim Shines throughout the film, whilst the positivity and enthusiasm can be seen on every child’s face. We feel very privileged to be able to shine a light on the work that the SEA is doing and help raise the profile of squash within the sporting community.”

SEA Executive Director Tim Wyant said: “We’re incredibly grateful to SquashSkills for creating ‘A Bronx Tale’ and are thrilled that it has been nominated for the Peace and Sport prize. The documentary is an inspiring illustration of how squash is positively impacting young people at CitySquash in the Bronx and cities throughout the world.”

‘A Bronx Tale’ can be viewed via the SquashSkills website: https://squashskills.com/squash/-/-/a-bronx-tale-4563/

Further information on the making of the film can be found here: https://squashskills.com/blog/-/bronx-tale/

Throughout August, SquashSkills will be donating five memberships to urban programmes for every one purchased on the site: http://www.squashskills.com/membership 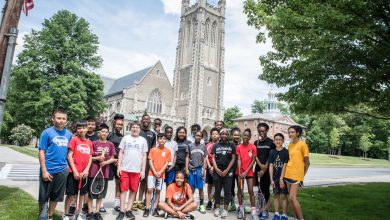