Gaede, a former member of the German junior national team, recently began his term following his election in late September. He replaces outgoing interim president Christian Oswald and will see out the remaining two years of Steve Mann’s term, after the former president’s retirement on 29 December 2020.

Current priorities for the DSQV include a recent drive to attract new refereeing talent to the existing pool and the upcoming 43rd DSMP / DSQV German Youth Championships.

Welcoming Gaede, Louis-Marie said: “I congratulate Michael on his appointment. I am excited to hear of his ambitious plans for German Squash and applaud DSQV‘s efforts to develop more junior referees. German Squash has historically acted as a driving force in the development of the game in Europe and we are confident DSQV will play a major role in the years to come.”

Gaede, meanwhile, told WSF: “Since my first time in a court at the age of seven in 1982, squash has ruled my whole life! For this reason I would like to make everything possible for this wonderful sport in order to reach even more people to play squash.”

Besides his new role, Gaede will continue to work in his capacity as DSQV’s Federal Chief of Juniors as well as towards a number of European Squash commitments. 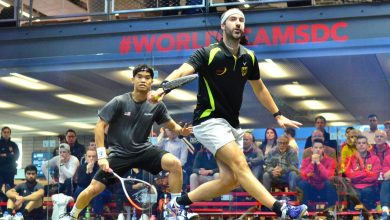